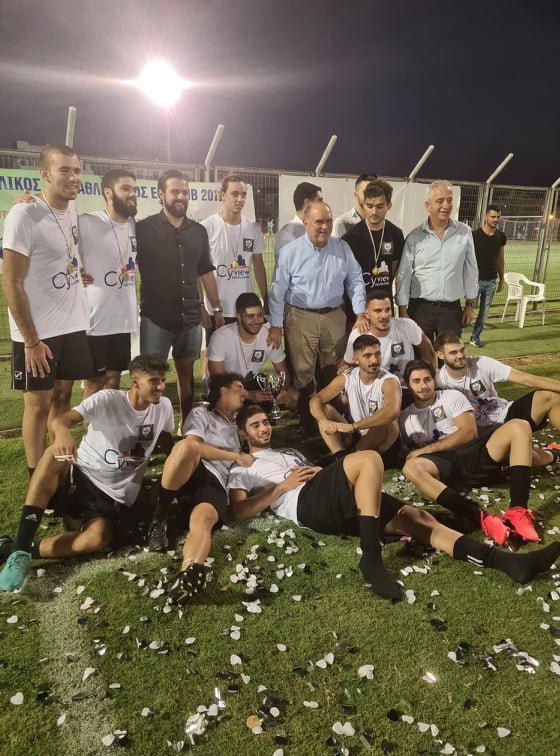 The game took place in an enthusiastic atmosphere and with the participation of several football fans, which because of the pandemic of COVID 19 took place on 8th September in the auxiliary stadiums of Makarios Sports Centre. The two finalists, present were the teams of LEICESTER and BRIGHTON. The final was held under the auspices of the President of the Cyprus Sports Organisation, Mr. Andreas Michaelides. The league was dedicated to the campaign against addictions: “WE REJECT THE SUBSTANCES, WE SEARCH FOR THE SUBSTANCE”

In a thrilling game, Leicester’s student football team emerged as champions of the EFEK United Kingdom championship, beating Brighton’s team 5-4 in the penalty shootout (the regular match ended in a 1-1 draw).

Before the start of the final, the President of the CSO in his greeting, after welcoming the teams and the leadership of the EFEK, wished every success in the final, stressing also: “It is a great pleasure to welcome to the auxiliary stadiums of Makarios stadium, the students – football players and fans to live and applaud together a special football match. A race that brings optimism to our sport, after all we’ve been through with COVID 19 pandemic.”

The CEO of Global Education, Mr. Chris Sofroniou, a genuine fan well known for his passion for football, also attended and enjoyed the game and in the end, he congratulated both teams.

Major sponsor for the third consecutive year was our company, Global Educational Services